What do you get when you mix certain immune cells with vitamin D and a disease-provoking molecule? An innovative new vaccine for type 1 diabetes.

“We are trying to educate the immune system to teach it what not to do,” Bart O. Roep, Ph.D., Chan Soon-Shiong Shapiro Distinguished Chair in Diabetes at City of Hope and professor/chair of the Department of Diabetes Immunology, told BioSpace. “It is a radical approach that does not involve immunosuppression – it engages the immune system and causes desensitization, like allergy treatments.”

This approach is considered an ‘inverse vaccine’ because it reverses certain immune responses, rather than activating the immune system, like most vaccines do.

“This approach was a visionary thought – I was very uncomfortable with how other autoimmune conditions are treated by suppressing the immune system,” said Roep, who is also director of City of Hope’s Wanek Family Project for Type 1 Diabetes. “We wanted to design a therapy to directly addressed the cause of type 1 diabetes.”

The vaccine was recently reported to be safe based on the results from a small Phase I trial, paving the way for continued clinical development.

Type 1 diabetes (T1D) is an autoimmune disease where the person’s immune system attacks the insulin-producing cells in their pancreas. Over time, too many cells are destroyed, and the person can no longer produce sufficient insulin, the hormone that regulates blood sugar levels; no insulin means no blood glucose regulation.

T1D usually begins its destruction years before symptoms become apparent. This makes it much harder to show any clinical benefit with treatment as much of the damage has been done when treatment starts. Intervening earlier in the disease’s course could prevent that destruction in the first place, significantly improving the patient’s life.

The vaccine creation process begins by taking blood from the patient and isolating certain white blood cells. These cells are turned into special immune cells called dendritic cells, which are key regulators that help train other immune cells, such as T-cells, to recognize invading pathogens.

“Dendritic cells are the conductors of the immune orchestra,” Roep explained. “They teach other immune cells what to do and what not to do.”

While generating dendritic cells in the lab, they are grown for six days in liquid that contains vitamin D3. Although vitamin D3 is known to be important for calcium regulation and bone health, it also regulates the immune system, causing anti-inflammatory effects. (Interestingly, vitamin D insufficiency is alsolinked to a higher riskof getting T1D and is prevalent in people with T1D. Infants and children who have sufficient vitamin D intake have a lower risk of developing T1D; however, using vitamin D to manage T1D after it is diagnosedremains unclear.)

“Treating the cells with vitamin D3 is the magic bullet,” Roep commented.

The anti-inflammatory dendritic cells can be cryopreserved until the patient is ready to receive them. Two days before the cell-based vaccine is given to the patient, the dendritic cells are thawed and treated with a fragment of proinsulin, a precursor protein to insulin. Proinsulin is an autoantigen that provokes the immune system to destroy insulin-producing cells in T1D patients.

These ‘trained’ dendritic cells regulate the patient’s immune system by training T-cells not to attack proinsulin. Once in the patient, the dendritic cells from the vaccine induce regulatory T-cells (Tregs), which regulate other immune cells, such as the ones that attack insulin-producing cells in the pancreas. 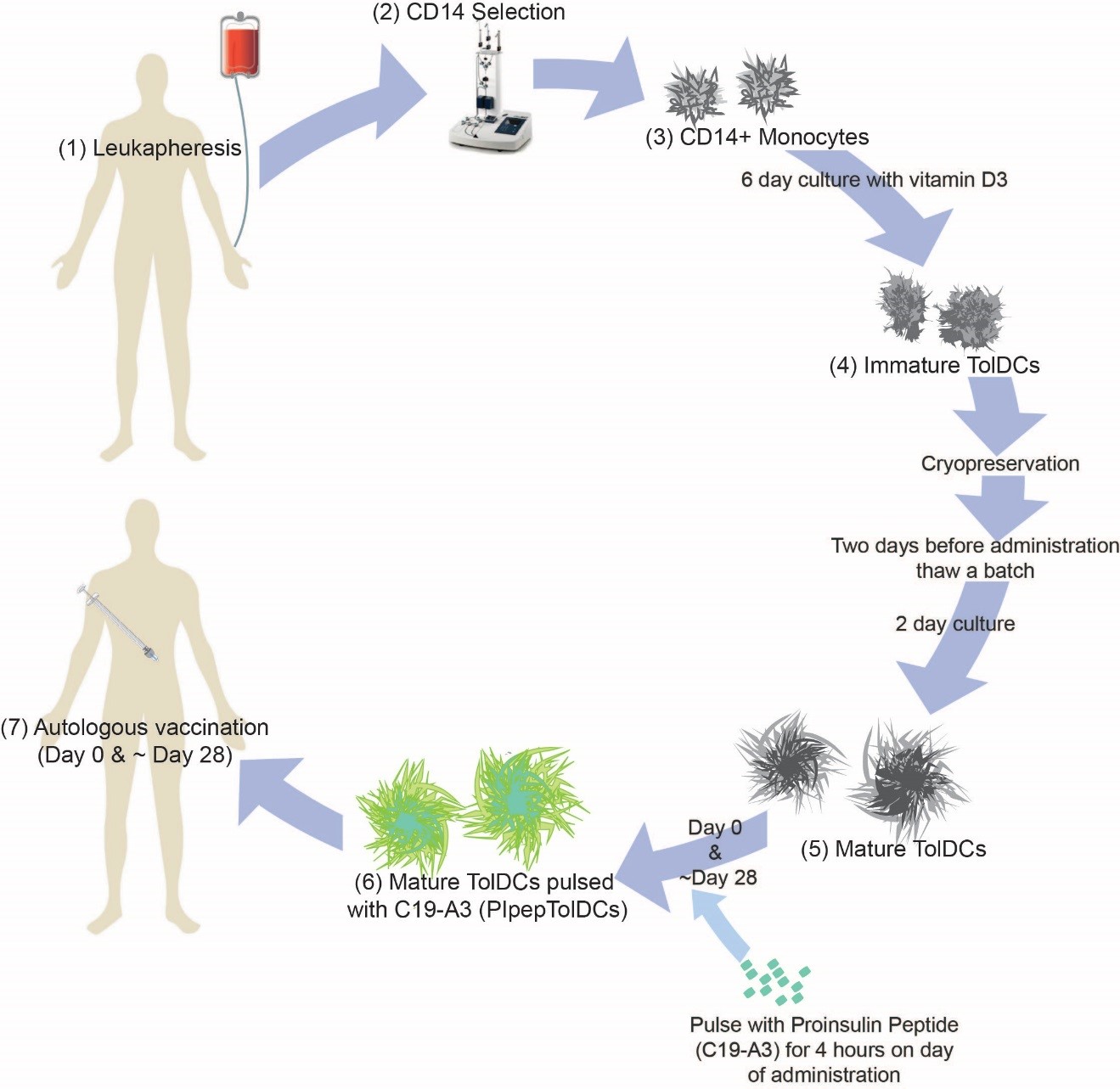 The vaccine is administered in two injections one month apart, as a primer and a boost, to ensure the dendritic cells are doing their job. “Regulatory T-cells have a much longer life than dendritic cells, so this modified dendritic cell vaccine creates a legacy to teach the patient’s immune system how to do it right,” added Roep. “This is why the vaccine is only given twice.”

The injections are not what you’re thinking either – the vaccine is given by a patch that is put near the pancreas (which is in your abdomen, below your stomach). 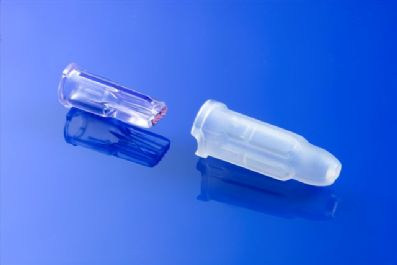 Patch that delivers the vaccine under the skin. Picture provided by Dr. Roep.

The patch contains microneedles that deliver the vaccine under the skin above the pancreas. The dendritic cells will then ‘swim’ (migrate) to the pancreas tissue. The combination of localized delivery and tiny needles makes this safer and more bearable to the patient.

This cell-based vaccine, the first of its kind, uses a person’s own immune cells to create a vaccine specifically for T1D.

“While cell therapies are not new, reprogramming dendritic cells is relatively new,” explained Roep. “Our approach using a reverse vaccine is completely new. We have good science to build on and we understand the mechanism of action, so now we are turning to patients. It’s a whole new world.”

The Phase I study was conducted at Leiden University Medical Center in the Netherlands. Nine long standing T1D patients (diagnosed more than 12 years ago, on average) were given the skin patch injections and followed for six months. All patients were on insulin to manage their T1D throughout the study.

“The preclinical mouse studies were skipped all together because the proinsulin used to make the vaccine is a humanized protein and the immune cells are human too,” Roep said. “This was very risky – it could have aggravated the immune system and made things worse.”

Luckily, the vaccine was found to be safe and well-tolerated up to the highest dose. There were no severe adverse reactions (just some mild skin irritation around the patch), no signs of general immune suppression, and no induced allergy to insulin, as reported in The Lancet Diabetes & Endocrinology.

All patients had healthy blood sugar levels after treatment. Of the nine patients, three had low levels of functioning insulin-producing beta cells; none of those patients showed an accelerated loss of beta cell function.

“The vaccine manages to keep the immune system in check by inducing immune tolerance to the proinsulin molecule,” Roep explained. “This is the holy grail for an autoimmune disease – it is very promising.”

Roep’s group is currently planning a Phase I study to test this vaccine at City of Hope, the first time it would be tested in United States. They will study the safety of this vaccine in T1D patients who have been diagnosed in the last five years. These patients should still have some insulin-producing beta cells and should still be able to make some of their own insulin.

“By administering the vaccine earlier, we can figure out if it can rescue the beta cells and secure the remaining insulin production,” Roep explained. “We would need to confirm this vaccine is safe in people who can still make their own insulin through a Phase Ib trial.”

If safety is confirmed, this Phase Ib trial can be a lead-in to Phase 2 work to assess the efficacy of protecting beta-cells and insulin production.

“We are cautiously optimistic and proceeding carefully, being mindful of taking the necessary steps to ensure patient safety,” Roep concluded.